All Questions posted a week before EGM were unanswered and I received personal harassment. 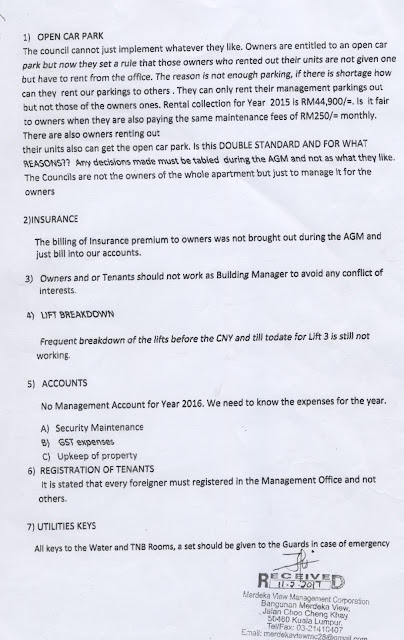 During the EGM, I volunteered to provide my personal sound system in the EGM whereby Mr Philip Yap had instructed a guard to stop me. I merely had to explain to the guard that Mr Philip Yap and the guard service received salaries that came from monthly maintenance payments from the owners of the apartments. This was a meeting of the owners and it will be unlawful for the guard to disallow a sound system that would help create more order in the meeting as only one person get to speak at a time with the microphone given to him. The guard didn't stop me and as you can compare the two video clips, the EGM had less people shouting and individuals could speak clearly to present their views at the meeting.

For my purpose of allowing the meeting to be carried out in a more organized fashion in loaning my sound system, Mr Philip Yap continued his harassment to me by clamping my car which was properly parked outside, having an authorized sticker some time on Monday as I only discovered it when wanting to use the car in the evening. I asked the guard why and they said it was under Mr Philip Yap's instruction. 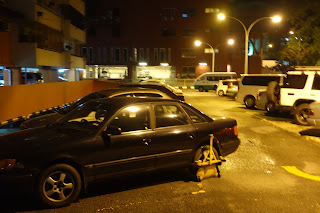 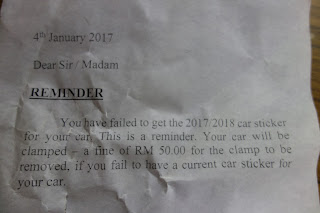 As it was raining in the evening, a piece of paper put on my windshield was totally irrelevant as it claimed that I failed to get the 2017/2018 sticker which I did. It also said that I was also to be fined RM50 for the clamp to be removed if I failed to have a current car sticker for the car which was obviously on the windshield as per the photo below! 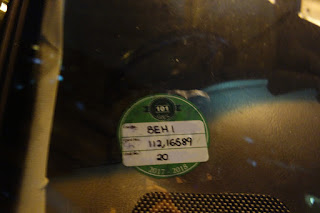 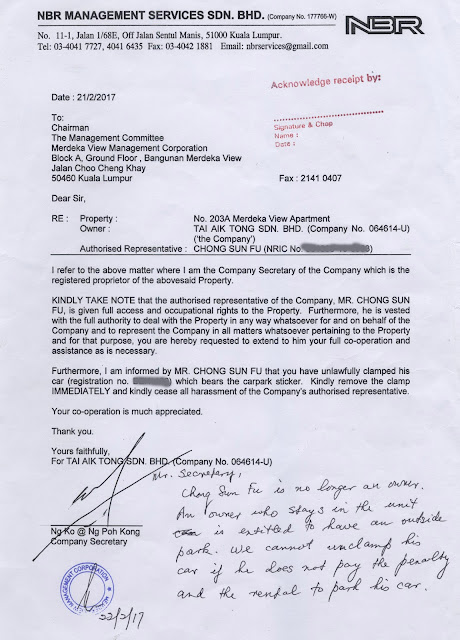 First thing I did the next day was to get the company secretary to issue an official letter to the Building Management committee addressed to the Chairman. When I presented the letter to the office, Mr Philip Yap rejected it and presented his reasoning that I was only a tenant and not entitled to an outside car park despite the letter stating clearly that I was the authorised representative of the Company who is given full access and occupational rights to the property. Furthermore the Company letter stated that I am vested with the full authority to deal with the Property in anyway whatsoever for and on behalf the Company in all matters whatsoever pertaining to the Property! 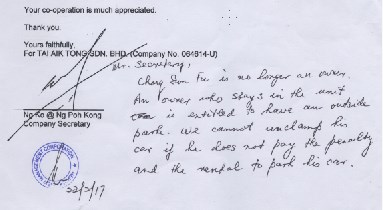 Mr Philip Yap took it upon himself to reply this letter addressed to the Chairman while he was only a hired building manager, repeating again that only an owner who stays in the unit is entitled to have an outside park! Obviously Mr Philip Yap does not understand the law pertaining to the legal entity of a company with power to appoint anyone legally by a resolution of the Board of Directors to act for the company or live in the apartment as it's representative as the company as an owner is not a human being who can live in the apartment unit!